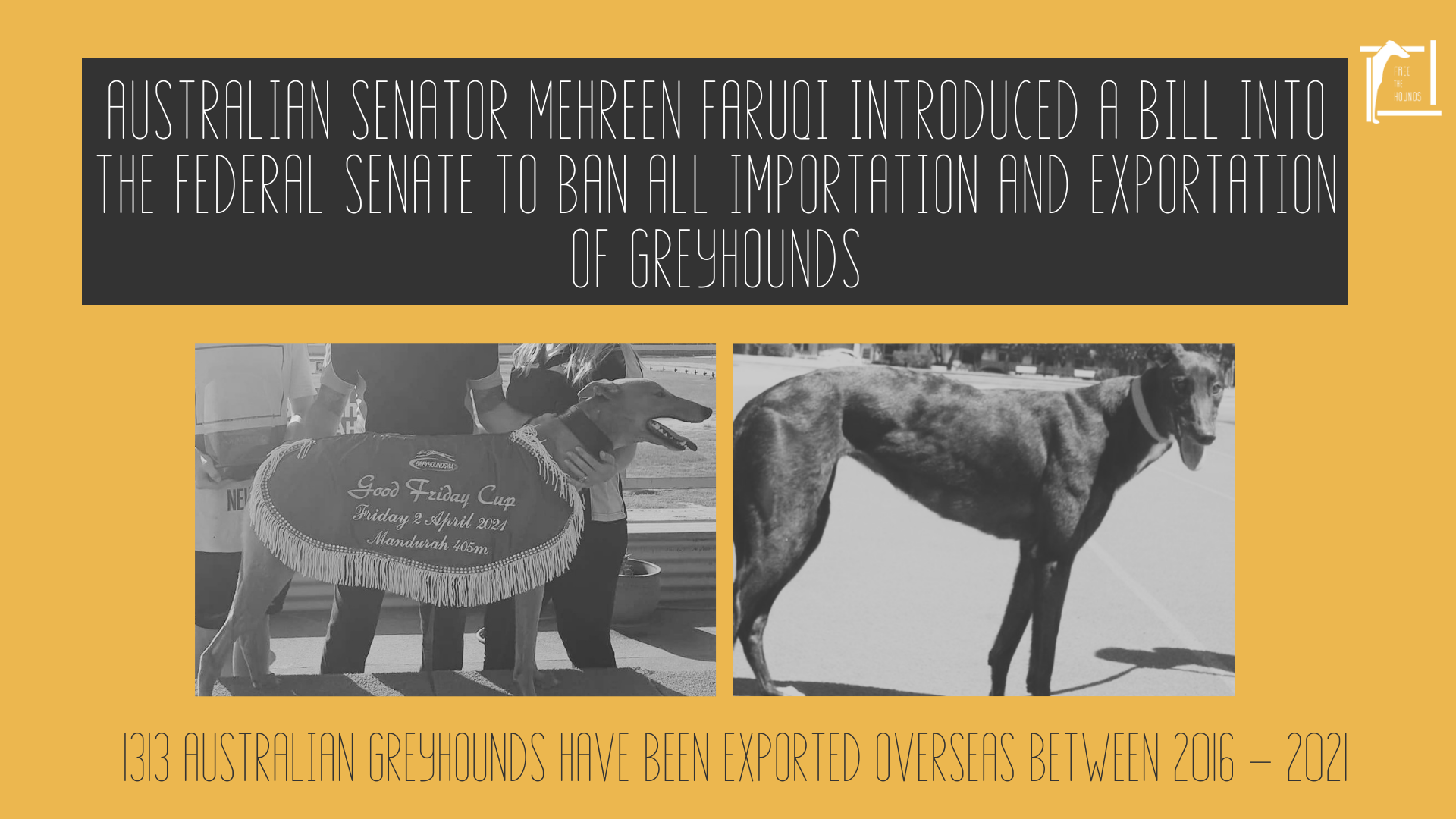 Perth-based greyhound welfare advocacy group Free the Hounds is throwing its weight behind a federal bill introduced to parliament on September 1st by Australian Greens spokesperson for Animal Welfare, Senator Mehreen Faruqi. The Customs Legislation Amendment (Commercial Greyhound Export and Import Prohibition) Bill 2021 aims to prohibit the exportation and importation of greyhounds for breeding, racing or any other commercial purposes. The bill also includes a ban on greyhound reproductive material. Free the Hounds is calling on all Australians to sign the Greens’ petition condemning greyhound exports and supporting the bill. The group also wants the WA Government to throw its support behind the bill by encouraging its Federal counterparts to vote in favour of the bill.

After much public scrutiny, Australian racing industry authorities tightened up regulations to crack down on greyhound exports, but the trade has continued through loopholes that allow it. Senator Faruqi released figures from the Federal Department of Agriculture showing at least 1,313 greyhounds were exported overseas from Australia between January 2016 and 31 July 2021. According to the Department, two greyhounds have been sent to China as ‘companions’ in the past two months. Free the Hounds is currently awaiting response to a recent Freedom of Information request seeking the details of these two dogs.

Ms Harrison led the group’s research project into greyhound exports that has collected evidence of 326 Australian greyhounds in China using a Chinese breeding website that advertises the dogs for breeding purposes. The data includes greyhounds registered to Western Australia despite Racing & Wagering WA (RWWA) denying the involvement of WA racing participants in the exportation of greyhounds to countries blacklisted by Greyhounds Australasia. An example is WA greyhound Ruble Monelli that was owned and trained by two of WA’s prominent racing participants. Ruble is now being used for breeding in China with her most recent service just last month to male greyhound Canya Cruise that broke a record at Mandurah track and won the Good Friday Cup in April this year. Another dog used to service Ruble is Ikaku Bale that last raced at Cannington in 2017 and was owned and trained by WA racing participants. Greyhounds are used as breeding machines in China and there are no regulations to limit the number of litters a female dog can produce.

In 2017, RWWA investigated the export of a greyhound named Lonely Road from Perth to China via Hong Kong. Lonely Road was owned by a syndicate made up of both Tasmanian and WA racing participants, according to the Fasttrack website. No one was held accountable for the export of Lonely Road and RWWA refused to release the investigation’s report to Free the Hounds under FOI laws.

In addition to greyhound exports, research by Free the Hounds shows Australia also exports greyhound semen to be used to inseminate female greyhounds in China. The combination of greyhound exports as well as the shipping of reproductive material from Australia has resulted in the large-scale breeding of greyhounds in China, with the offspring used for racing or further breeding. Many of these offspring end up in the dog meat-trade.

Candy Cane Rescue, a U.K. run re-homing group has been rescuing greyhounds from the Chinese racing industry and meat trade since 2017. The group claim greyhounds are in the top three most common dog breeds eaten in China. The group has shared horrific footage on its social media pages showing greyhounds stuffed into sacks, crammed on to meat trucks, suffering untreated racing injuries, kept in abhorrent conditions, and being subjected to unimaginable abuse in meat markets and slaughterhouses.

Until the Australian Federal Government bans the export of greyhounds and reproductive material, Australia will continue to be complicit in the greyhound overbreeding and cruelty that is currently occurring China. New regulations implemented by racing authorities have reduced direct greyhound exports to countries with poor animal welfare laws however greyhounds have still ended up in China via countries approved for export. The penalties for unauthorised exports are not harsh enough to act as a deterrent. Exporters can simply claim they failed to lodge transfer of ownership paperwork to the racing authority and receive a small fine. An example of this is Greyhound Racing NSW participant Chenhao Sun being fined a measly $100 last year for the unauthorised export of Pay By Cheque because he claimed he didn’t complete the relevant paperwork. Making greyhound exports for commercial purposes illegal will ensure harsher penalties, deterrence, and Free the Hounds believes will end this cruel trade once and for all.

All comments may be attributed to Melissa Harrison 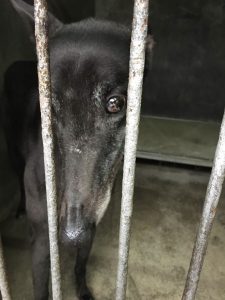 Australian racing greyhound at the Macau Canidrome with an untreated eye condition.